Dear friends! Another training season in the Mumonkan Aikido Club has come to its end.

We think this season was successful and fruitful. Please be informed that from July 1 to August 8, 2011 the Mumonkan Aikido Club declares summer vacations. 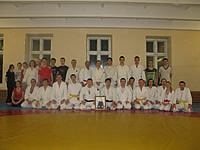 Dear colleagues and friends, we wish you all a good summer sun, relaxation, and new bright impressions.

See you on tatami in August!