The main task of Mumonkan club is studying Aikido techniques in modern conditions.

The main Aikido principle is in use of inertia of the opponent against himself, depriving him of equilibrium, creation for the opponent of uncomfortable position in which the possibility for him to focus his strength in one point is excluded. In this case any technique will be most effective.

The form is filled with the contents due to the balance of three components:

At execution of any technical action it is necessary to take into account the geometry (escape angle), physics (impact on the opponent's center of gravity), logic and common sense. 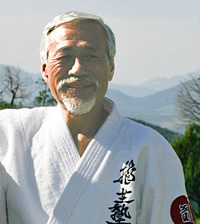 Aikido is not a system in which you can study secret fighting techniques allowing you to defeat any opponent. Aikido teaches to use a principle with the help of which it is possible to use already existing knowledge with greater efficiency and with less effort. Thus Aikido is an advanced training faculty for people who already have experience in martial arts. For those who have no such experience, the training method should include studying of throwing and striking techniques, fighting strategy.

Relation Aikido with other martial arts

Aikikai is not a style. It is an organization, a society uniting many masters who are bright and not similar to each other, who created various styles of Aikido. Different methods of teaching based on fundamental traditions are used in these styles.

Into the Aikido outline the elements of other fighting systems are harmoniously included such as: Judo, Karate, Kendo, Aiki-Jutsu which do not contradict each other and Aikido technique, but vice-versa, strengthen and supplement each other, take on a new meaning.

Quality of technique is not just a sum of separate elements. Together they form a martial art. "Aikido must not be isolated from the harsh reality by exotic ritual. It should be a martial art which has been cool mixed on invaluable fighting experience of other martial arts. Masters declining the experience of other styles, usually don't know well their own style, its wisdom and depth. Their technique is just a blind imitation, senseless repetition of movements, the sense of which is neither clear nor interesting. They quote their teachers, not going deep into the sense of clever words" (D. Tedeev). As Fredrick J. Lovret wrote in his book "The Way And The Power: Secrets Of Japanese Strategy": "the reason for such state of affairs is that the majority of people remember Ueshiba as a soft old man of 80, but not a tiger he was at 50. They forget his statement that «Aikido is 99% composed of strikes»". 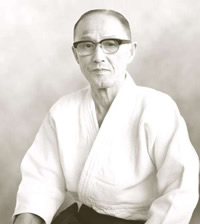 "Aikido is a spontaneity. The forms serve only for illustration of the principle. If there is a principle and a purpose of Aikido, any technique can be Aikido. If they are absent there is no Aikido" (M. Saotome). Classical traditions of Aikido techniques execution only specify the direction and training scenario today. "Your strongest position is the one which suits your body type best. You cannot learn it, you should find it yourself. It is not the question of wider or narrower position of your feet. People will do what is convenient for them so if you allow them to do it, they will create it [strongest position] for themselves. You always should come back to the basis, this is important" (G. Shioda).

Aikido and the reality

There is no template or a cliche. You cannot have the same second twice – your body position and angle of attack change all the time, every time the technique will be different.

Ueshiba said: "Aikido should correspond to the current time, to meet the requirements of usual people, but not to be an anachronism". In Aikido the rigid techniques (direct strokes, painful, throws, controls) are studied, but the emphasis on circular movements creates illusion of dance.

If a technique does not change for a long time and is not adapted to modern conditions it becomes lifeless, stiff and inefficient. While demonstrating techniques on compliant students some teachers themselves lose contact with and control of the opponent, they become detached from reality and fall into the illusion which causes the predictable ending outside tatami.

Wisdom comes from experience, and truth – from practice. We do not give confidence, we do not even give hope, we give a chance. Our aikido technique is distinguished not by what we do but by the way we do it. We study not only the techniques and methods, but also conditions at which any action becomes most effective. A technique is saved in subconsciousness only because of the stress and increased adrenaline. Creating a real attack on tatami, our students study the Aikido technique in conditions very close to reality which enables its effective use outside the dojo.

Aikido is many-sided and it is not restricted by limits of health-improving gymnastics. In our club the techniques of Judo, Karate, Aiki-Budo and Aiki-Jutsu are studied within a program for a certain Kyu. We adapt the Aikido techniques to modern level of possible opponent and we do not position ourselves as real or combat Aikido, but rather as Aikido of a present time.

We invite all those who do not believe in application basis of Aikido to our club, we will try to convince you and show you the martial aspect of Aikido. As forms of techniques are standard, it is possible to feel the difference only in practice.

We will be glad you to see you in Mumonkan club. Choose dojo and welcome to free first lesson.