In our video gallery you can see technical execution of some Aikido holds, to see variants of Aikido execution techniques with representatives of other martial arts, to learn methods of fighting with weapon by Katori Shinto-ryu school technique. In "Training routines" section you can see and estimate the specifics of trainings in our club, and visualize all the nuances of Aikido technique execution. 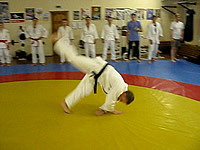 Here is a videos showing all the main warm-up elements – basic movements (in the stance and on the knees) and safety techniques. More details » 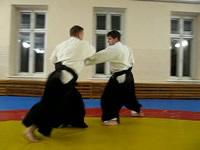 Here is a video on how the main part of a training is performed in Mumonkan Aikido Club, and besides several non-standard techniques are shown. More details » 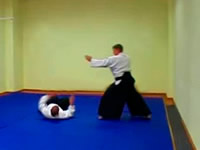 Here is a video featuring execution of some Aikido techniques. More details » 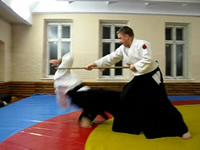 On this page there is a video of training with weapons, and the description of the weapons used. More details » 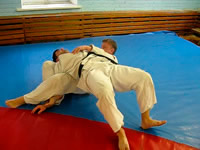 A self-defense section a Mumonkan Aiki-Jutsu

On the base of Aikido Mumonkan school there has been created a self-defense direction – Aiki-Jutsu Mumonkan. This page provides a brief video overview of the techniques studied. More details » 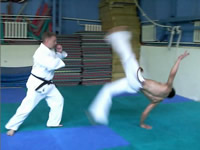 Aikido with representatives of other martial arts

Here is a video showing how Aikido techniques can be used against representatives of other martial arts, such as Karate, Thai boxing and Capoeira. More details » 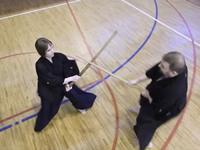 As you know, Aikido is not just a form of martial arts. It is a philosophy which is deeply influenced by religious concepts of peace and universal harmony. As a result studying of attack as the main form of demonstration of aggression is not paid due attention to in Aikido. Thus attack in classical Aikido is not executed but only demonstrated so it looks formal and unreal.

We understand that people mainly come to the dojo to practice self-defense. So it's necessary to study what you are to defend yourself from – a real attack. Aikido is not a separately existing system, it is a synthesis of fighting systems. Nothing prevents you from studying Aikido techniques along with elements of other martial arts: Karate, Judo, Jiu-Jitsu and Aiki-Jutsu. That's why special attention at the trainings in our club is paid to practicing of striking and throwing techniques.

The trainings program includes the following:

We also studied how to use weapons. Aikido originated in Japan – a country where people are not indifferent to weapons of all kinds. For more than five centuries in the Land of the Rising Sun there exists samurai fencing school – Tenshin Shoden Katori Shinto-ryu. It is officially recognised by the government of Japan. The school teaches the art of swordsmanship, fighting with pole, bo, and naginata. Practicing Katori Shinto-ryu greatly supplements Aikido trainings. It is easily explained by the fact that many features and nuances of Aikido techniques execution become clear and obvious, when you have in your hands a thing like a bokken or a jo.

Note. It is necessary to understand, that only by means of video materials it is impossible to master Aikido independently, as far as there is no one to correct your mistakes, make the necessary adjustments in techniques, give advice and detailed explanations. Therefore, all of the videos presented here have not an educational but a demonstrative character.