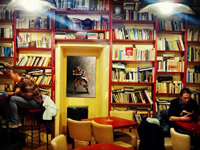 In bookstores and the Internet you can find a lot of different literature on Aikido. However, not every book's content corresponds to the spirit of this martial art. Of numerous books on Aikido, we chose those with which we recommend you to get started first of all.

This book is the first attempt to fill the gap in good, serious literature on Aikido – not only with description of Aikido techniques, but also of spiritual, power, and psychological aspects of aiki. Here are collected beautiful, inspirational sayings and poems of the Founder of Aikido Morihei Ueshiba (plus his unique portraits). Here you can read the biography of Master, the story of the movement he created and introduction into Aikido as a system of integral human development (all of it – from the book of Kisshomaru Ueshiba, the son of Morihei Ueshiba).

Perspectives for the development of Aikido are discussed in the books of Tetsutaki Sugawara, Koichi Tohei, who were immediate disciples of Ueshiba. Sugawara develops martial aspects of Aikido and tries to expand its range of techniques owing to techniques from Chinese martial arts (notably Tai-Chi-Chuan). Tohei created a non-combat, health-improving (or, more precisely, generally developing) direction of Aikido, which is simply called Ki (Chi). In his book he describes many simple energy tests and exercises that can be practiced even by individuals who are very far from martial arts.

Basic exercises of "pure" Aikido from Ueshiba's book Kisshomaru are not less fascinating, and are also useful not only for novice fighters.

In applications the reader will find articles on key terms of Aikido from highly respected in the West "Dictionary Of Martial Arts" by Louis Fredrick.

Fredrick J. Lovret, The Way And The Power: Secrets Of Japanese Strategy, 1987 by Paladin Press

Strategies of victory have been studied for thousands of years, but only with the arrival of Japanese samurai the strategy has evolved into an exact science. "The Path And The Strength" reveals the two sides of Japanese strategy (physical and psychological), it considers in detail many aspects of this science, including In-e, Michi, Ki, Aiki, Maai, Hesi, Minar and Sutemi, as well as their use in combat and in business. Instructor of Ken-Jutsu and Aiki-Jutsu, Fredrick Lovret included into his book a pronunciation guide for Japanese terms used in the text, and besides he analysed some famous battles in the light of Eastern strategy. Learn the strategies that worked perfectly for generations of winners. Entering battle with an opponent or a competitor in business or with a master of Ken-Jutsu, think only of winning.

Morihei Ueshiba – the great martial arts master, the creator of Aikido. "Budo Renshu", the first of two books, by O-Sensei, which appeared in 1933 and was used as a guide for teachers of martial arts. The book consists of three sections: instructions in poetic form, outline of Bujutsu principles and the systematic description of techniques provided with illustrations. The contents of the book covers a wide range of issues: from religious and philosophical aspects of budo and the foundations of martial strategy to the nuances of individual techniques. At the end of the edition a glossary is added including Japanese terms used in the text.

The book will be useful for everybody practicing Aikido and in particular for those who wish to experience the ultimate Aikido.

Mitsugi Saotome, Aikido And The Harmony Of Nature, 1993 by Shambhala

"Aikido And The Harmony Of Nature" reveals the profound philosophical and ethical principles embodied in the art of Aikido and relates those principles to nature laws. It is one of the most comprehensible, deepest and most inspiring books ever written about Aikido and even – in regard to these matters – about any other type of martial arts. It is a unique approach to the teaching of the founder of Aikido, Morihei Ueshiba, outlined by his immediate disciple who had been practicing under his guidance for fifteen years. Mitsugi Saotome examines the spiritual philosophy of the Founder, the warrior ideals of feudal Japan as the basis of his martial arts philosophy. The author shows that physical movement in Aikido is the embodiment of principles of the spirit. A negative force is not met with aggression, instead it is controlled and redirected by means of force and balance of movement of spirit. Aikido movements can only be understood as movements based on universal laws and processes of nature. Sincere practice and studying of Aikido deepens our appreciation of nature's perfection in its balance and returns to us the harmony with everything that surrounds us, with other people and with ourselves.