HomeNews of the Mumonkan clubThe results of the training season 2011-2012.

Dear colleagues and friends! The training season 2011-2012 has ended, and we would like to sum up briefly its main results. 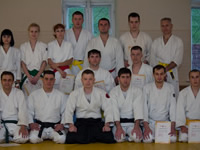 Dear friends, since July 1, 2012 the Mumonkan Aikido Club announces summer vacation. There will be no trainings during this period. We will inform you further in advance about the date of commencement of trainings.

See you on tatami!